Is Decaffeinated Coffee Safe To Consume When Trying To Conceive

Caffeine is present in many drinks and foods, such as coffee, tea, colas, and energy drinks like guarana and chocolate. It may also be present in protein or chocolate bars, energy bars, and non-prescription medications such as cough syrup and weight loss products.

Caffeine is a stimulant, which means after 5 – 30 minutes after having it, it increases your brain and nervous system activity and raises the cortisol and adrenaline hormones in your body.

Today, it remains a debate regarding how much caffeine is safe to consume while trying to conceive and during pregnancy. While much of the evidence recommends a moderate caffeine intake, some experts warn that women who plan to become pregnant avoid caffeine altogether. Hence, decaffeinated coffee is often presented as an alternative when wanting to cut back on coffee consumption, but is it a safe fertility alternative?

This article tells you all you need to know about caffeine and is decaffeinated coffee safe to consume while trying to conceive and during pregnancy. 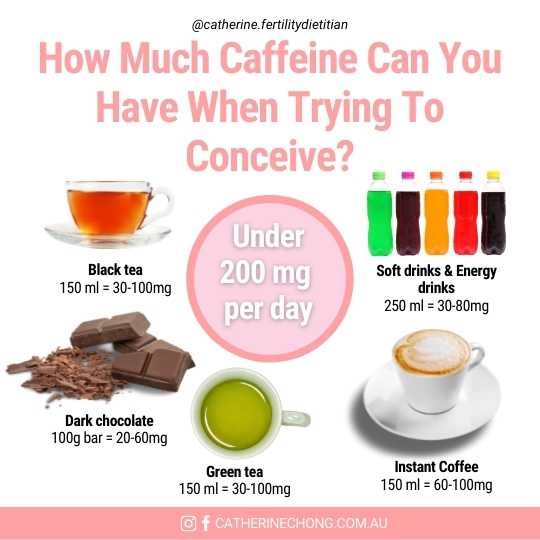 A current review study found that caffeine consumption during pregnancy was related to an increased risk of miscarriage, stillbirth, low birth weight and/or small for gestational age. These risks are entirely dose-dependent.

One recent meta-analysis (2014) of 60 studies concluded that for every 100 mg/day increment in maternal consumption of caffeine during early pregnancy, the risk of miscarriage in the early pregnancy increased by 14%, 10% stillbirth and 10% small for gestational age infants.

Some experts suggest no safe levels of maternal caffeine consumption and advocate for pregnant women and women trying to conceive to avoid caffeine altogether.

One prospective cohort study in 2018, which consisted of over 11,000 women, found a positive association between pre-pregnancy coffee consumption and the risk of spontaneous abortion, particularly at weeks 8 – 19. Compared to women with no pre-pregnancy coffee intake, women consuming ≥4 servings per day had a 20% increased risk of spontaneous abortion.

In another prospective cohort study of over 2,000 women and men in North America, caffeinated tea intake was associated with slight reductions in female fertility.

How Much Caffeine Is Safe?

The current advice from major guidelines is that moderate caffeine consumption, less than 200 mg per day from all sources, is safe during pregnancy. This is approximately two standard cups of coffee per day.

Can I Drink Decaffeinated Coffee While Trying To Conceive?

While the name may have some think decaf means no caffeine is present, decaffeinated coffee does contain some caffeine. However, it is significantly less than a regular caffeinated coffee, with about 4-8 mg of caffeine per cup.

Decaffeinated Coffee & The Impact On Fertility

A 2018 review of literature on caffeine consumption and fertility found that pre-pregnancy consumption of caffeinated and decaffeinated coffee increased the risk of early pregnancy loss, suggesting that there may be other components in the coffee other than caffeine driving this relationship.

Another study found that consumption of approximately 3.5 cups of decaffeinated coffee a day over four weeks decreased testosterone levels in women. This can be potentially detrimental, as low testosterone in women can negatively affect fertility by reducing sex drive and lowering levels of sex hormones.

One study explored caffeinated and decaffeinated coffee’s impact on In Vitro Fertilisation (IVF) outcomes. It was found that decaffeinated coffee had no significant effects on the number of total oocytes, mature oocytes, fertilised oocytes or high-quality embryos retrieved throughout the IVF process.

There is no conclusive evidence on whether decaffeinated coffee is a better alternative, with many contrasting findings. 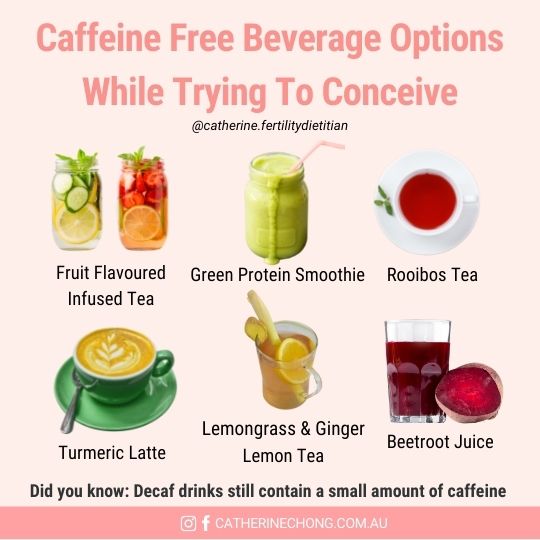 If you decide to avoid caffeine altogether, here are our top favourite caffeine-free options you may like while trying to get pregnant:

For further information on how you can optimise your fertility, book a Free 15-Minute Discovery Call with Dietitian Catherine Chong now.

With all my love